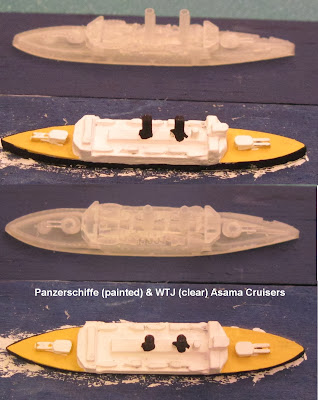 Due to a serious illness, it is over two years since I last posted . . . but I'm feeling better now and today I got my first look at some of the new "War Times Journal" rapid prototype plastic 1/2400 pre-Dreads . . . and I'm impressed. 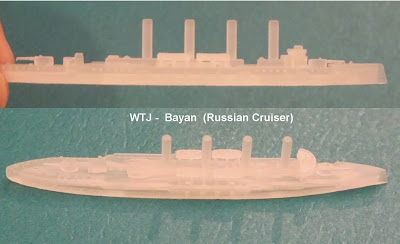 The models are hollow with some bracing so are very light weight.  This, however, does muddy their surface appearance since you are also looking inside.  Nevertheless there seems to be excellent detail . . . as can be seen with the 53mm-long British Majestic-class pre-Dread battleship below.  (As always you can see a much larger image if you open the photos in a separate window.)

The Japanese Cruiser Asama (approximately 55mm in length) can be seen below: 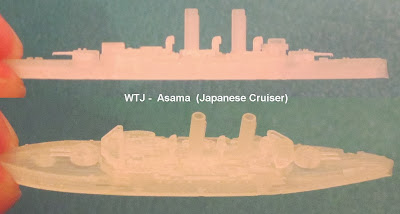 Finally here are a pair of Destroyers.  The DD#3s are about 24mm in length; while the DD#5s measure 28mm (the detail is certainly superior to my Panzerschiffes . . . and the DDs are a tad cheaper as well):

My next post will show some comparison photos between WTJ and Panzerschiffe versions of the same vessel.

I have added some 15 ships to my RJW fleets. Seven Russian ships and the eight Japanese ships posted a few days ago. 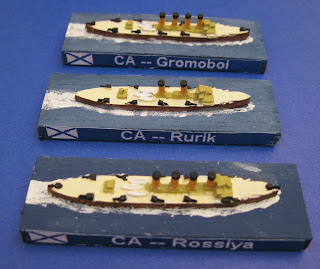 Today I will post a few snapshots of the new Russian ships . . . much as I did with the Japanese additions in my last post.

The first photo shows Three Russian Armored Cruisers . . . and remember to click on photos for a larger image.

The second photo shows four new Protected Cruisers which have been added to my fleet. They will be easy to tell apart . . . notice that each one has a different to their funnels . . . either in shape or number.

I have added some 15 ships to my RJW fleets. Eight Japanese vessels and seven Russian.

Today I will post a few snapshots of the Japanese fleets and save the Russians for another post.

The first photo shows four added Armored Cruisers . . . and remember to click on photo for a larger image.

The second photo shows four new Protected Cruisers which have been added to my fleet. And, yes, after gluing on the labels, I do now realize that I misspelled "Otowa" . . . *sigh*.

The good news is that I've finished painting over a dozen more Russo-Japanese warships. The bad news is that Bogger doesn't seem to want to upload photos right now . . . *sigh* . . . so you can't see them yet.

Still, it shows that I haven't forgotten my Pre-Dreads.

The Battle of the Yellow Sea was refought Sunday afternoon . . . and resulted in a stunning and decisive Russian victory. (Click on thhe photo below for a glimpse of the action.)

* Note that Murdock has now published his account (with better photos). 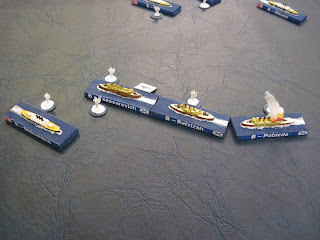 While it is true that three of the Czar's battleships slipped beneath the waves, the Japanese lost not only three of their remaining battleships, but two heavy cruisers as well. Indeed, as three Russian battleships sailed to meet up with their Vladivostok cruiser squadron, the sole remaining but heavily damaged Japanese battleship was seen to have fires burning as it disappeared in the distance.

Pete, Murdock and Murdock's son Alex joined me in my game room for our initial trial of the "Naval Thunder: Rise of the Battleship" rules. 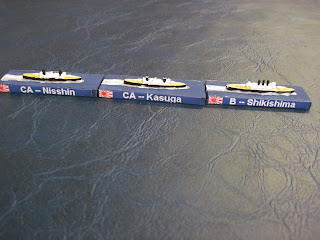 I gave Alex his choice of which Division he wished to play and he chose the Japanese 2nd Division (again, click on any photo for a much larger image):

He also wanted to play on the same side as his Dad . . . so Murdock took command of the Japanese 1st Division . . . pictured below: 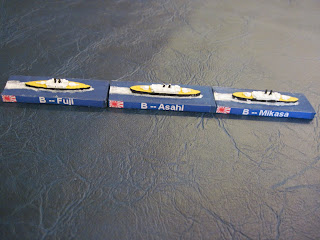 The Japanese plan was for the First Division (Mikasa, Asahi and Fuji) to take the lead and to cut off the Russian attempt to break out.

Meanwhile the Second Division (Shikishima and the two Heavy Cruisers, Kasuga and Nisshin) was to hang back as a second line. 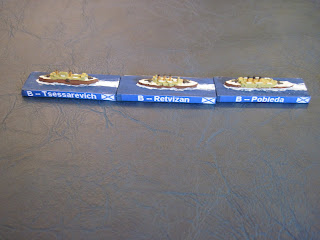 This meant that I was left to command the Russian 1st Division (Tsessarevich, Retvizan and Pobieda). 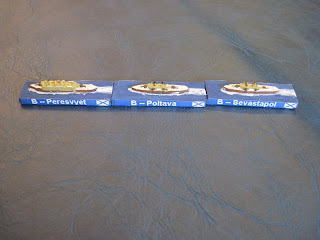 My "battle plan" must remain a state secret due to its success . . . and due to the fact that my command disappeared beneath the waves with no survivors.

Indeed, Pete's complete 2nd Division survived with little damage . . . so he will get the credit for this stunning Russian victory.

Well it looks like Pete, Murdock and Murdock's son, Alex will be coming over this coming Sunday for my first Russo-Japanese game.

We will be playing a cut-down version of the Battle of the Yellow Sea. By that I mean that we will only use the six main ships for each side . . . which should be a fairly even match-up.

I've changed my basing scheme by the way. I am using balsa wood (36" x 1" x 1/4") cut into 3" sections. Onto this I've added identification labels onto both sides of each base. These aren't finished yet . . . hopefully I'll finish the basing tomorrow and be able to take a few photos.

This will be my first chance to try out the "Naval Thunder: Rise of the Battleship" rules. But it also means that I've got a lot of prep work still to do. I need to make some splash markers . . . note that Col. Campbell (Jim Pitt) has just posted a clever way to do this on his blog. Furthermore, I need to make up some fire and flooding markers.

Finally I also need to print out the ship status cards for each ship . . . and I've redesigned them for my own ease of use . . . but now I have to see if I can print them so that they don't clutter up the table too much.

And, of course, I just realized that I need to get some munchies too . . . but not tomorrow because we will be putting up our Christmas tree (and decorating it) tomorrow. Right now the basic tree (a local Douglas Fir) is out in the garage waiting to be decked out in all its glory.